Researchers, policymakers, doctors and the public have long debated how to best measure U.S. health and health care, yet the challenge persists.

The nonprofit and nonpartisan State of the USA is taking on this challenge and developing a new website intended to provide reliable and objective data on health along with a number of topic areas, including education, the economy, the environment, energy, housing, crime and justice and demographics, among others. The goal is to provide a free, interactive and highly accessible site enabling the interested public to track progress in areas of keen socio-economic interest and concern.

In 2008, State of the USA asked the Institute of Medicine to recommend 20 measures considered key to assessing health. Each measure was to demonstrate:

That led to the formation of an IOM Committee on the State of the USA Health Indicators, which set about culling a myriad of publicly available health indicators to a manageable set of 20 considered crucial for understanding the state of the nation's health. 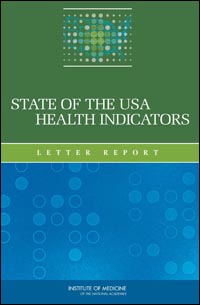 In delivering its report in November 2008, the IOM urged policy makers and others to focus on the 20 indicators as "yardsticks to measure the overall health and well-being of Americans."

"This report takes an important step of capturing the health of the American people with a few key indicators," said committee chair George J. Isham, medical director and chief health officer, HealthPartners Inc. of Bloomington, Minn. "We believe this set of measures... can help move the nation toward better health."

Ultimately, the 20 IOM indicators will be part of a new website that provides other accessible measures - along with equally vetted data -- across a range of topics. Key indicators for the economy, education, the environment and other national concerns will be delivered in a way that enables exploration and surfaces connections across categories

The IOM committee took this into account in developing its selection criteria. Its report emphasizes that one's physical environment, such as air and water quality and housing, and the social environment in which people live, work and play, are fundamental determinants of health. However, such measures were not included in its list of health indicators because they are expected to be captured in the development of other issue areas for the upcoming State of the USA Web service.

The committee's report also underscored the importance of identifying socioeconomic and race and ethnicity disparities across a variety of issue areas, calling them "crucial to a better understanding of the determinants of health and health outcomes."

With criteria in place, the committee organized its selections in three categories - health outcomes, health-related behaviors and health systems.  The resulting recommended health and health care indicators are:

Health Outcomes
Life Expectancy at Birth:  "The committee believes that the number of years that a newborn is expected to live if current mortality rates apply is an important indicator both of the health of the nation overall and as a means of identifying disparities among populations within the United States," according to the report.

Infant Mortality:  Deaths of infants aged under one year per 1,000 live births "is used as an indicator of the level of child health and overall development and is often used to identify disparities among populations within a specific country."

Life Expectancy at Age 65:  "The number of years of life remaining to a person at age 65 if current mortality rates continue to apply is an important indicator of the health of a growing segment of the U.S. population," said the committee. The measure "can be used as a general indicator of the overall health of those over 65, as well as the quality of, and access to, health care services among the elderly."

Injury Related Mortality: "Age-adjusted mortality rates due to intentional or unintentional injuries" includes deaths due to motor vehicle traffic, poisoning, firearms and falls.  In 2004, they were responsible for seven percent of all deaths in the United States, 1.9 million hospitalizations and 32 million initial visits to emergency departments, the committee reported.

Self-Reported Health Status: The percentage of adults reporting fair or poor health is "an important indicator of the health and productivity of a population and a good predictor of morbidity and mortality, as well as health-care seeking activity because people usually seek care only when they feel ill."

Unhealthy Days, Physical and Mental:  The committee found that one's "mean number of physically or mentally unhealthy days in the past 30 days" is a valid measure for perceived physical and mental health. In addition, as with self-reported health status, it is "predictive of morbidity, mortality and health-care seeking behavior."

Chronic Disease Prevalence:  The committee was unable to find a single indicator reflecting the burden chronic disease places on the American population, so it chose to select specific common chronic diseases using the following criteria: "the disease is associated with substantial morbidity or mortality; quality data are readily available; international comparisons are possible; and the disease is cited in national and international documents." It concluded that "the percentage of adults reporting one or more of six chronic diseases (diabetes, cardiovascular disease, chronic obstructive pulmonary disease [chronic bronchitis and emphysema], asthma, cancer and arthritis)" should be used as a key indicator to track health and health care for the U.S. population.

Serious Psychological Distress:  The panel's chosen measure is "percentage of adults with serious psychological distress as indicated by a score of 13 or more on the K6 scale." The K6 scale is a screening tool used by health professionals to identify cases of serious mental illness.

Smoking: The recommended indicator is the percentage of adults who have smoked more than 100 cigarettes in their lifetime and who currently smoke some days or every day. "Smoking is a leading cause of death and disability in the United States and is an important modifiable risk factor," the panel wrote.

Excessive Drinking:  Citing excessive alcohol use as the nation's third leading behavior-related cause of death, the committee recommended including the following measure on the State of the USA website: Percentage of adults consuming four (women) or five (men) or more drinks on one occasion and/or consuming more than an average of one (women) or two (men) drinks per day during the past 30 days.

Nutrition: Given the relationship of diet to health, the panel recommended tracking "the percentage of adults with a good diet as indicated by a score of 80 or more on the Healthy Eating Index." Created at the Department of Agriculture in 1995, the index measures how well American diets conform to federal dietary guidance.

Obesity:  Calling obesity "one of today's most pressing public health issues," the committee called for tracking the percentage of adults reporting a Body Mass Index (a measure of height compared to weight) of 30 or more.

Condom Use:  Noting that risk behaviors for sexually transmitted diseases are prevalent among sexually active youth and that, by age 19, seven out of 10 teens have engaged in sexual intercourse, the committee recommended as a key indicator "the proportion of youth in grades 9-12 who are sexually active and who do not use condoms, placing them at risk for sexually transmitted infections."

Health Care Expenditures: The panel recommended tracking per capita health care spending, a measure used for understanding expenditures over time within the U.S. and one of the most widely used measures for comparisons with other countries.

Insurance Coverage: Percentage of adults without health coverage via insurance or entitlement is considered a key measure because lack of coverage is "a well-established determinant of access to care and is responsible for about 18,000 unnecessary deaths in the United States each year," according to the report.

Unmet Medical, Dental, and Prescription Drug Needs: Problems with access to health care, including lack of insurance and limited availability of providers, can be tracked by the "percentage of (non-institutionalized) people who did not receive or delayed receiving needed medical services, dental services, or prescription drugs during the previous year," according to the recommendation.

Preventive Services: The panel suggested the percentage of adults who are up to date with age-appropriate screening services and flu vaccination as an indicator of prevention.

Childhood Immunization: "High rates of childhood immunization are important to protect not only individual children, but also [to prevent] outbreaks of disease among communities," the committee wrote. As a measure, the group recommended the "percentage of children aged 19-35 months who are up to date with recommended immunizations."

Posted by Howard Parnell at 10:36 AM on December 1, 2009
BE A BETA TESTER A 'beta,' or initial State of the USA website, is currently in development. To volunteer to participate in our future beta testing program, email us (with subject line: 'Beta Test'). All submissions are private. For questions, please use the feedback box below.